Move Across The Country to New York CIty 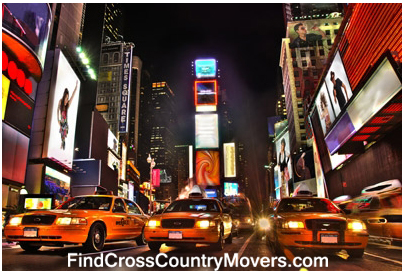 [blockquote]
Thinking about making the move to the Big Apple? Most people have the thought jump through their mind at a point in their lives, and who can hold back that thought? It is a very appealing city to think about living in, and it has an aura of awesomeness that surrounds it. The sites, sounds, tastes and excitement of the city are world-class indeed… but is it the right city for you?
[/blockquote]

Many Americans and people from all over the world are seduced by the allure of the Big Apple, and for a good reason. There is little chance to be bored in New York, even if you are only visiting for a bit. But if you are willing to stay here you will need more than just a passing reason to, right? There is a whole lot the city can offer you and this article aims to help you understand a bit of the allure. We begin with some of those reasons:

A Few Reasons to Move to New York City

New York City is home to some of the United States’ best museums, allowing you to stroll through vast amounts of history, art and exhibitions during your time there. Manhattan alone has many species being documented in the Museum of Natural History and also the collections of the Metropolitan Museum of Art. You will have a chance to experience Egyptian art, Caravaggio paintings, modern art and more under their roofs. If you want even more, you could always pay regular visits to the Museum of Modern Art, the Guggenheim Museum, Brooklyn Museum and the large number of local galleries scattered around the city.

Although vacations here are something many may experience, living in the city has its own charms and benefits. You will experience a multicultural melting pot of ideas, people, languages and societies like no other on Earth. Some estimates claim that there are more than 200 languages being spoken in the city! You will also have a chance to experience a wide plethora of cuisines, ranging from African to Asian and European to traditional American. This city truly does have some of the best cuisine in the world.

You can also enjoy many interesting and intriguing activities around New York City around holidays, such as the famous Rockefeller Center Christmas tree, which towers over people and shines with its 30,000 lights. Ice skating in Central Park, enjoying movies, opera, the local club scene, comedians, street entertainers and so much more – these are just fragments and small parts of what the most iconic city in the United States has to offer for its citizens and visitors.

Living in New York City will let you stroll around and use some of the symbols of the city, such as Times Square, the Grand Central Terminal, New York Public Library and one of the most grand symbols of the United States – the Statue of Liberty. Take tours and time on top of the Empire State Building, walks around the Brooklyn Bridge Park or any of the other locations around the metropolis.

You can go for a drive around on the outskirts of the city, Manhattan itself, the Hudson Valley or the nearby towns of Cold Springs and Sleepy Hollow for some relaxation and change of scenery. The Franklin D. Roosevelt State Park and Hudson Highlands Gateway Park offer great opportunities for outdoors fun, as well as the Hamptons, Montauk and Fire Island.

Regardless of how you spend your time around the Big Apple, you will never be bored by your stay here. The turbulent and emotional nature of the city will never let you stay bored for long, as there is always something new to experience in its ever-changing landscape, no matter where you go. Good luck!

Heather Roberts is a content writer from London, UK. She has great flair for decoration and interior
design. She is searching for new challenges and hence often moves to different places. Heather writes about moving and storage services like those of: http://removalsmanandvan.com/a-guide-to-planning-your-acton-house-removal/

Here is a cool video explaining some features of the NYC: